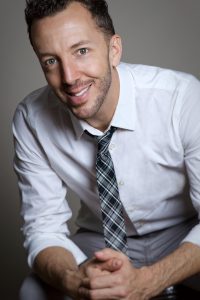 Like many newcomers, his first job was touring the country in a van doing a children’s show where he had to bark 144 times a day. Yes, 144 times a day. Once human again, Brian worked in some of the most prestigious regional theaters around the country. He also was cast in an Off Broadway show, Off-Off Bway shows, and lots of new works that you have never heard of!  Brian has been seen in several Actor’s Fund Broadway Benefit concerts with Jennifer Hudson and Ana Gasteyer (HAIR – Grammy nominated cast recording) Josh Groban (CHESS), Rosie O’Donnell (PIPPIN), and he even shared the stage with Sir Ian Mckellen.  Most recently, Brian landed the Olivier Award winning 50th anniversary tour of Jesus Christ Superstar touring the country and dancing his heart out! Before that he was on the 1st national tour of School of Rock as a swing covering 10 people’s parts! He also toured nationally with Joseph And The Amazing Technicolor Dreamcoat, playing Rueben singing “One more angel in Heaven” next to American Idol’s Diana Degarmo and Ace Young, and the International Tour in South Korea of Jekyll & Hyde, starring Kyle Dean Massey and Diana Degarmo. Brian also won the Carbonell Award (Florida’s Acting awards) for best actor in a musical portraying Huey in Memphis! He hopes to never bark again. Check out his full resume.

Brian’s most noteworthy job was a supporting role in Disney’s “When In Rome” starring Kristen Bell, Josh Duhamel, Angelica Houston and Danny Devito.  Brian played Kristen Bell’s secretary “Chaz” – although she never called him by his name they kept him as “male secretary” in the credits.  See his scene reel to watch him in action!

In addition to acting, Brian was co-director/owner of a Unique New York Productions, a company that produced flash mobs for large businesses including one in Times Square during NY fashion week for Shellac Nails.  He also produced Youtube music video parodies that went viral and were featured on the Today show twice with Kathy and Hoda!  Because of this success he started his own company doing this same type of work called Uncle Brian Productions.

In addition to his acting/producing side, he has also discovered the wonders and healing elements of yoga and reiki. in 2010, he became a certified Yoga Alliance Teacher and a reiki healer with his master attunement. He has since created Uncle Brian Wellness, inspired by his beautiful “niece” Zoe, which offer holistic healing services.

As you can see, there is never a dull moment in the life of Brian. Please check out more on this site and see all that he’s been up to!  Thanks so much for visiting!  Send a message and say hi!